Bulgaria’s rural areas have seen a dramatic change in the last decades: the population of many villages is dwindling, a lack of public infrastructure, such as schools, medical services, sometimes even water and electricity supply, but also of jobs have driven many people in the bigger cities or abroad; at the same time Bulgaria’s population is in general shrinking every year at a fast pace, also as a result of the low reproduction rates. On the other hand, cheap property prices, great nature and the appeal of a simple life where you live in a peaceful surrounding, growing your own fruits and vegetables have led to a migration in the other direction: some foreigners discovered Bulgaria as a place that seems to be suitable for retirement and old age, and a lot of the villages have now a few foreigners living there, many of them from the UK. This is the backdrop of a novel by Mikhail Veshim, The English Neighbour (Ciela Norma, 2015, translated by Milena and Simon Bullock).

The book tells us the story of John, recently retired engineer from Manchester and his wife Patricia, who have decided to resettle in the village of Plodorodno. They have already visited Bulgaria several times, have attended a Bulgarian language course, and are now looking forward to refurbish their house and to somehow integrate in their new community. They dream of the tranquility of rural life.

The book describes in a humorous way the difficulties John and Patricia are facing in the village. There are the “big shots” of the village, ex-Colonel Shturbanov, a man with ties to the former State Security, and his counterpart the Mayor. While the Mayor takes a very positive attitude to the new arrival (“our main investor”), and saves him from many troubles, the ex-Colonel sees the new arrival as a potential threat to his shady business (he is producing fake whiskey and later also fake Viagra); around this conflict we get to know the other main characters: the gorgeous barmaid Gloria, who renamed the local pub into “London”; the local skinhead, who later turns out to be basically a good boy; Nikolai, a football fanatic who tries to legally change his name into “Nottingham Forest” – an undertaking that is only partly successful; his mother who is transferring her motherly feelings partly to the new arrivals in the village; Vancho, the former owner of the house, and his ex-wife (a Russian), who produces a document that “proves” that half of John’s and Patricia’s house is owned by her; a shady lawyer and a helpful judge; the TV team of a private channel that lurks around in the village, trying to report about events that are not taking place in the way they were announced; and a few more.

It is clear rather from the beginning that the book is a comedy; many of the small happenings are a little bit over the top, but good dialogues and a fast pace of the story result in an entertaining read that was not surprisingly turned into a sitcom that has been rather successful, as I was told (I can’t judge from first-hand experience, since like John, I don’t have a TV in Bulgaria.). The humor results mainly from the “Clash of Cultures” that the villagers and new arrivals experience; too different are their views of life as not to create misconceptions, misunderstandings and funny situations.

The author mentions that he got the idea to the book while talking to a villager:

“He told me that an Englishman had settled in a neighbouring village….he was a hardworking guy who bought a tractor and started tilling the land while locals preferred to lie about in the pub, drink beer and talk him out of farming. The Englishman couldn’t get why they considered agriculture a lost cause. Finally, he managed to convince them that one can make profits from agriculture.”

While the book is in general very funny, it touches on a serious subject and is basically a story about the Bulgarians; the Englishman “is simply the looking glass in which we see our reflection.”

A fast and easy read, and it made me laugh many times. And when you consider to resettle in a Bulgarian village, it is no mistake to pick this book up either.

Mikhail Veshim was born 1960 in Sofia. In 1982, Veshim graduated from Sofia University, specializing in journalism. Since the same year, he has been working in the satirical newspaper “Starshel” (Hornet), where he has been the editor-in-chief since 2003. In 2008, Mikhail Vessim, together with the satirist Vasil Sotirov, received the National Prize for Creativity in the Field of Humor and Satire “Rayko Aleksiev”. His novel “The English Neighbour” is one of two Bulgarian books (together with “The Arch” of Zdravka Evtimova), nominated for the European Parliament’s Literary Prize. Veshim is the author of twelve humorous novels. 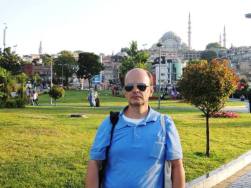 One thought on “Mikhail Veshim: The English Neighbour”