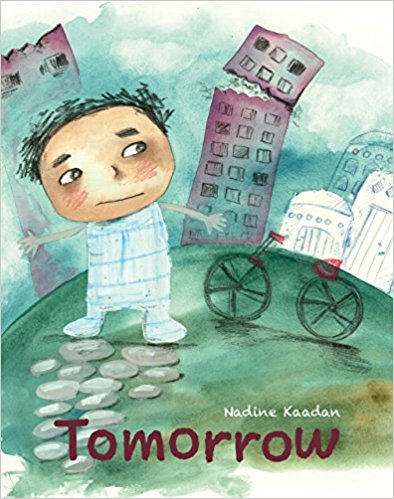 This is a moving and thought-provoking illustrated story dedicated to Syrian children faced with anxiety and fear during the Syrian civil war. But it’s a powerful tale that will resonate with all readers, particularly those who have never considered what it is like to be a child in a warzone.

Yazen hasn’t been to school for weeks, and he can’t even go out and play with his friends or ride his bike. His artist mum no longer draws with him and his dad hardly pays him any attention –both just stare at the news on the TV or on the phone, trying to work out what is going on in their city plagued by war. Frustrated, Yazen escapes from the house with his bike, but when he sets foot outside he no longer recognizes the world around him, with bombed out shells of houses and terrifying noises and smoke all around. His father rushes out to find him and his mother, realizing that Yazen needs her attention, her comfort, and her support, gets out her paintbrushes for her and Yazen to paint a playground mural inside their house.

The story is simple but compelling and the dizzying illustrations keenly convey the fear and the frustration of a child trapped inside, surrounded by conflict.

Seeing Nadine running her inspiring storytelling and art workshops for children,I’veseen first-hand how much interest there is among children, parents and teachers in Tomorrow. It’s the perfect book with which to explore a child’s experience of war and works as a great starting point for a discussion of the global refugee crisis in the classroom or at home.

Although inspired by Nadine’s own experience of the Syrian civil war, the location is not named in the book. The story prompts a universal discussion of conflict and the impact it has on children, on their freedom to play and their right to education, not to mention the strain on family dynamics. It also brings a message of hope: while we cannot control our futures, or what is going on outside, when there is love there is strength.

Nadine Kaadan is an award-winning children’s book author and illustrator from Damascus, Syria, now living in London where she completed her MA in Art and Politics at Goldsmiths, University of London, and MA Illustration at Kingston University. Her goal is to tell and illustrate stories which focus on Arab culture and Syria’s rich heritage, and to encourage a reading culture amongst Arab children. She has published over 15 books with various publishers. She travels to many countries to give interactive workshops at schools and literature festivals. She was selected in 2017 by the Bratislava Biennial of Illustration to represent Syria with her artwork from The Jasmine Sneeze. More on Nadine here:

* From Syria to the UK, Diversity and Children’s Picture Books: Guest blog on Picture Book Den 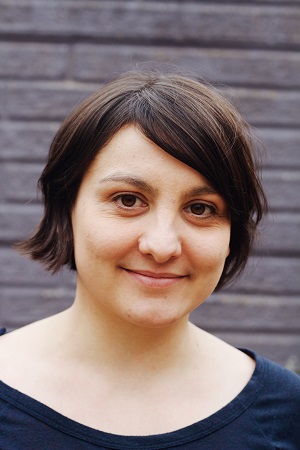 Ruth Ahmedzai Kemp is a British literary translator working from German, Russian and Arabic into English, with a particular interest in children’s books. She has translations forthcoming of YA fiction by Kathrin Rohmann (Apple Cake and Baklava, about a Syrian girl in Germany) and Yulia Yakovleva (The Raven’s Children, about a boy in the USSR whose parents are arrested under Stalin’s terror). She is currently translating a short novel by Palestinian children’s author Ahlam Bsharat.

One thought on “TOMORROW”