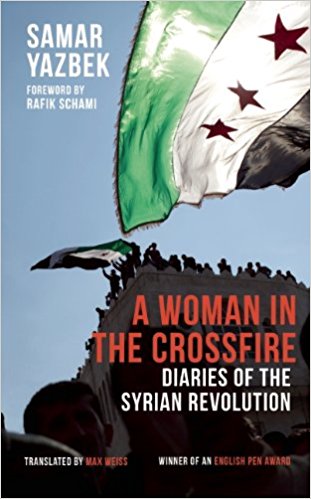 Reading A Woman in the Crossfire in the Fall of 2012 was not easy; the pain and suffering, both personal and collective, recorded by Samar Yazbek during the first one hundred days of Syria’s uprising against the regime continues unabated, and shamelessly without any effective international effort to relieve the suffering of civilians coming under fire from their government and the hardships of refugees who live in make-shift camps on neighboring borders. It is now 19 months later and lethal attacks are no longer one-sided affairs committed against unarmed demonstrators. Instead, they have escalated into a militarized conflict in which killing and brutality is perpetrated on both sides, snuffing out the original voices of opposition to the authoritarian regime and its legacy of repression against acts of dissent.

Samar Yazbek was born into a respected Alawite family in Jableh, Syria in 1970, meaning that she has lived her whole life as a subject of the Assad regime (le pre mounted his corrective movement that same year). Rafik Schami wonders in the foreword, where did this extraordinary woman find the courage to abandon all the securities of a well-to-do Alawite family and to declare her solidarity with Syria’s oppressed? This text is doubly an effusive and thoughtful response to this question that also manages to document the versatility of Syria’s social and political movements during their initial development. As the title suggests, the narratives are both personal (A Woman in the Crossfire) and collective (Diaries of the Syrian Revolution). The text documents Yazbek’s journey underground, her personal anguish as her family and many friends turn their back on her for standing with the opposition (and ipso facto becoming a traitor to her community). Unable to participate publicly (she is repeatedly harassed, arrested, and tortured by security officers) she struggles with finding the most effective way of participating from within. She is also a mother, terrified by the thought of the harm that is threatened upon her teenage daughter by both security officers and ordinary citizens. What kind of role can a silenced pubic intellectual – a journalist, writer, and former TV personality – play, as the brutality of the regime reveals itself to be more and more unimaginably vicious with each unfolding day?

Yazbek’s experiences during these first months of public outpourings are enough to constitute a memoir. She is a deft writer who takes the reader into her interior hell. What is happening to her and to Syria is almost killing her: she can’t sleep without taking the anti-anxiety sedative Xanax; she witnesses the savagery of the prison system first-hand after she is brought in front of senior security officers who demand she go on television to denounce the demonstrators as armed gangs and salafis. She refuses. They walk her among prison cells to witness the consequences of demonstrating, of raising ones voice against the regime, to witness the remnants of clobbered bodies before they possibly disappear forever. She looks into the eyes of a dead man for the first time in her life. She will see these eyes again. Death invades her thoughts. Every demonstrator is marked for death, but they continue to go out into the streets in Damascus, Dara, Douma, Baniyas, Jisr al-Shughur, Latakia, al-Baida, Rastan, Hama, Homs, Bab Amr and in many more towns and villages where ordinary people, young and old, men and women, fight against their fears to demand an end to the seeming inevitability that has determined their lives.

Yazbek finds inspiration in these extra-ordinary people, and purpose as a public intellectual, by documenting their experiences. She writes that she will approach these stories like an investigator, and they become her passion and anchor. Interspersed between her private anguish and torture, she records the testimonies of activists, witnesses, journalists, and survivors from all parts of the country. Between cigarettes and tears, she listens, and later after more cigarettes and tears she transcribes these eyewitness accounts as an act of struggle against the regime and as an act of rebuttal to their distorted renderings of events. As these accounts unfold, Yazbek begins to realize another consequence of the work: her attempt to understand the revolution. How did it begin? Who are these people that defy every shred of logic that should keep them indoors? How can she render this chaotic and incomprehensible rupture legible? Durable?

If one has been following the events unfold since March 15, 2011, one may recall the shock upon hearing the news of the massive siege on Dara and later Bab Amr and Homs. We watched shaky You Tube images of demonstrations, of tanks rolling through streets, of bodies laying on curbs and brave citizens carrying them home. We heard reports of injured demonstrators being arrested in hospitals, of soldiers defecting, and more and more atrocities. Yazbek corroborates all of this and intensifies our perspective with her first-hand accounts of the non-sectarian and peaceful intentions of those first few months. Through Yazbek we hear from a journalist who broke the Dara siege; a woman who watched her husband and child murdered by security forces in Hama 1982 and who, along with most Hamawis, faces the regime in 2011 steadfastly; an Alawi in Jableh at the time of the massacre; a defecting lieutenant; stories from Latakia and more. Time and again, people testify how the regime’s shabbiha and security forces would wreck havoc in their attempt to demonstrate sectarian, i.e. Sunni extremist, motivations. Only the opposite would prove to be true according to the stories Yazbek recorded. Furthermore, she reiterates how the regime was using Alawites as human shields, exploiting communal loyalty to shore up support.

One of the more prominent criticisms directed at the opposition is their lack of unity, that what happens in Dayr al-Zur is not connected to what happens in Damascus, and so forth. Yazbek establishes that the development of the coordinating committees located throughout Syria emerged slowly (sometimes too slowly for her) and even (I use the word hesitantly) organically, i.e. out of local needs. According to Yazbek, a group of activists met before March 15 and staged demonstrations in solidarity with Tunisians and Egyptians in their revolutions. They were swiftly repressed. The organizers decided to move their meetings into the mosques, not on religious grounds, but rather to remove themselves from the sight-line of security forces who were deployed everywhere throughout Damascus. This is how the zone of protest started to grow. On 15 March we were blown away by how many people came out to demonstrate, which meant there was no need to mobilize and rally them. The people were ready. The mobilizations grew into coordination committees by early May, each receiving a task according to various issues: politics, media, organization, medicine. Each Friday was given a rallying name, and each Friday people demonstrated anew.

No matter what, we knew that the mobilization came first on the popular level and attempts were made to pull the mobilization forward for the benefit of all sides. After much debate we concluded that pulling the mobilization in any one direction signaled the victory of the regime and the end of the popular mobilization, a distortion of it. We entered into discussions with them. The young men were open-minded and understanding, regardless of whether they were nationalists or Islamists or leftists. The beautiful thing was that everyone realized that the mobilization had a democratic platform, not just in Syria but across the entire Arab world. (200)

Sadly, Yazbek is forced out of Syria. She leaves for the safety of her daughter and commits herself to writing this text. She knows that Syria and Syrians are at the point of no return; neither the regime nor the people can go back to anything resembling pre-March 15. There is no dialogue with a traitor who kills his own people. From the vantage point of Fall 2012 we know that it is only armed fighters who are part of the dialogue now. Yazbek has endured unquantifiable suffering, yet still manages to distill a narrative that maps countless small acts of kindness amidst an enormous web of cruelty. As thousands die (34,000 as of this writing) and buildings crumble, A Woman in the Crossfire is a text that stands against the erasure of these experiences, of their burial alongside corpses, or of their re-editions by the next regime. No matter who or what is to come next in Syria, this text inscribes the many voices and shapes of rage that finally and peacefully erupted.

Alexa Firat is assistant professor of Arabic at Temple University where she teaches courses on Arabic Literature and cinema, and also language. She publishes scholarly research on Syrain literature and cultural productions in particular, and the Levant in general. Firat is alos a literary translator.

Max Weiss is an American scholar and translator, specialising in the culture and history of the Middle East. He studied biology and history at University of California, Berkeley before moving on to Stanford University, where he completed his PhD in modern Middle Eastern history in 2007. He translated A Woman in the Crossfire: Diaries of the Syrian Revolution.

This review was posted on Syrian Studies Association Bulletin in 2012.

One thought on “A Woman in the Crossfire: Diaries of the Syrian Revolution”