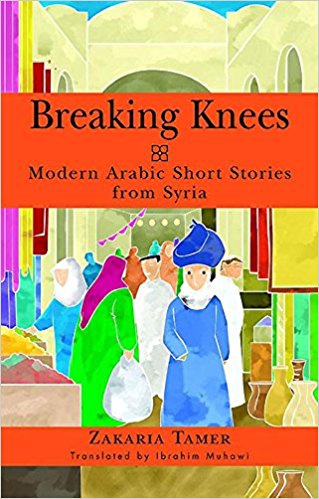 ‘Breaking Knees’: Sixty-three Very Short Stories from Syria is not about refugees or civil war. Nor do the stories involve terrorists. Conversely, Zakaria Tamer’s very short tales take place behind the front door, in living rooms and over coffee, between neighbors, and, most importantly, between the sheets. Relationships between women and men lay at the core of Breaking Knees. Tamer depicts a richly flawed society that originates from this foundation. Like ancient ruins, these relationships alert us to the effervescence and beauty of life as well as its inherent finitude.

‘Breaking Knees’ offers masterful prose, exemplified by each concise opening line. Though some stories are mere sentences in length, every character manifests his or her depth within admirably few words. This precision of thought is brought to the fore by Ibrahim Muhawi’s translation. His light touch not only retains the essence of Arabic nuance, but also refreshes the English language. With such superb storytelling and competent translation, Breaking Knees is, simply put, a must-read.

Lehyla G. Heward is in the throes of writing a PhD thesis at New Zealand’s Victoria University of Wellington. She researches Chinese and Korean literature from 1930s Manchuria. Short fiction, and literary non-fiction are some of her favorite genres. She loves to read translations because she feels at home in a cross-cultural setting. Since she also translates, they are great learning guides as well.

‘Breaking Knees’ is translated by Ibrahim Muhawi  who is Courtesy Professor in the department of Comparative Literature at the University of Oregon and has directed the Master’s Program in Translation Studies at Edinburgh University. He has also taught at the University of Jordan, Birzeit University (Palestinian Authority) and the University of Tunis, and served as Visiting Professor at the University of California, Berkeley, and the University of Munich. Professor Muhawi is the principal co-author and translator of Speak, Bird, Speak Again: Palestinian Arab Folktales. He has also translated poetry by  Ibrahim Nasrallah and Mahmoud Darwish, and two of the latter’s major poetic prose memoirs: Memory for Forgetfulness (Dhâkira li-l-Nisyân) and Journal of an Ordinary Grief (Yawmiyyât al-Huzn al-‘Âdî), for which he received the PEN translation prize in 2011 as well as Breaking Knees (Taksîr Rukab) by the remarkable Syrian writer, Zakaria Tamer. He has written a number of articles on the practice and theory of translation, and is co-editor of Literature and Nation in the Middle East.

One thought on “Breaking Knees”