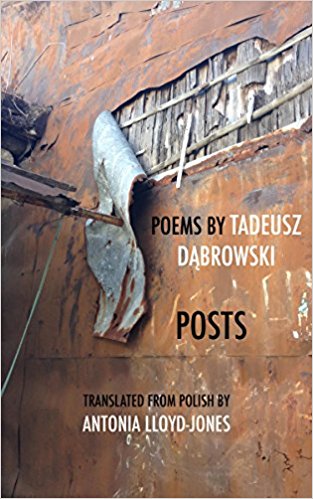 O to be a lock-keeper in Żuławy
on a non-essential branch of the canal,
amid a flat landscape. Every day
to ride a bike to a concrete cabin
smaller than a news kiosk. To watch through a
little square window the risings and settings of
the sun. To have no idea about art, to know
where the pike lurks, where the eels. On
a misty morning, drinking tea
with a dash of spirit, to hear on the radio, which
only gets one channel, that in the world there are
over ten million species of plants
and animals, and not to believe it, or
that there are countries where people are dying
of hunger, and to think about it, and forget
to open the sluice. And flood several nearby
meadows. And not bear any consequences for it.

Harvard Professor Emeritus,
thank you for coming to my reading,
though you had so many other attractions to choose
from, upstairs Šalamun was speaking, Pamuk two doors
down. Thank you for coming, although you started to
snore before I started to read, and you woke up again
at the applause. It was wonderful to watch you sinking
into your chair, plunging into the amniotic fluid
of sleep, nourishing yourself on my metaphors
through an invisible umbilicus. Or maybe in the meantime
you were out on a cosmic walk wearing a spacesuit
of Slavonic speech, protecting you from the void.
Or else you had no dreams at all, you were your
usual self after a stroke, and I was keeping you alive
in a poetic coma. I don’t know, in any case thank
you for coming. What mattered more to me was
your presence than your absence.

I strive to live as if I were going to die tomorrow.
The steady breathing of my sleeping wife, the taste of gherkin, the
odor of soil and of dill, of smoke suspended over
the fields, the sight of a couple necking on the dunes
– that’s too much. They say that every day brings
us closer to death. But in actual fact every
day distances us from death. What has happened to
me? Is it because of my brother, who drove off
on red into the blue yonder? Because of my father, who rose
again after seven hours, with his heart cut up, surprised
to be alive, frail and tearful? Perhaps. But maybe
it happened chiefly because of the gherkin, the squirrel,
the summer shower, all of the colors, odors and
textures, which bear comparison with nothing.

A botanical garden in winter

Instead of flowers and annuals ‒ in livid snow a forest
of nameplates: Ammobium alatum
(everlasting), Myosotis (forget-me- not),
Textus ubiquitus. All that’s left is to believe
in the roots and tubers buried in the earth.
Though what does it matter in winter? Only
in the palm house is life richly flourishing,
words spiral into stems and leaves, entwining to form
epics and philippics. They wither and rise again under
the caring dome of a plexiglass sky. In a nursery at the
edges of the garden, in perfect order,
new words are already germinating.

Author
Tadeusz Dabrowski (b. 1979) is a poet, essayist, and critic whose work has been published in major journals in Poland and abroad, including The New Yorker, Boston Review, Agni, American Poetry Review, Tin House, Harvard Review, Poetry Ireland, Frankfurter Allgemeine Zeitung, and many others. He has won numerous awards, including the Bienek Prize (2014), the Koscielski Prize (2009), the Hubert Burda Prize (2008), the Prize of the Foundation for Polish Culture (2006), and was nominated for Poland’s most prestigious award, the NIKE, in 2010. He has published six volumes of poetry in Poland, and his work has been translated into 20 languages. He edits the literary bimonthly Topos and is the art director of the European Poet of Freedom Festival. Dabrowski lives in Gdansk on the Baltic Coast of Poland.

Translator
Antonia Lloyd-Jones translates from Polish, and has twice won the Found in Translation award. She has translated works by several of Poland’s leading contemporary novelists and reportage authors, crime fiction, poetry, and children’s books. She is a mentor for the Emerging Translators’ Mentorship Programme (run by Writers Centre Norwich), and co-chair of the UK Translators Association