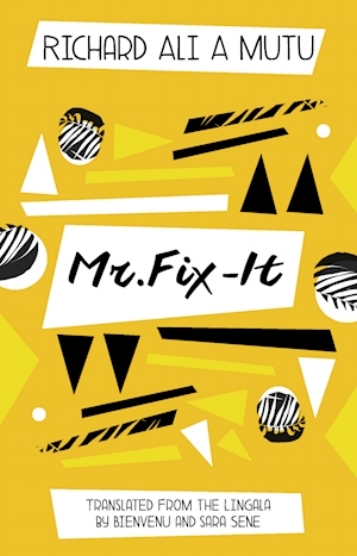 Ebamba’s name means “mender” in Lingala, but everything in the Congolese twenty-something’s life seems to be falling apart. In the chaotic megacity of Kinshasa, the educated but unemployed young man must navigate the ever widening distance between tradition and modernity—from the payment of his fiancee’s exorbitant dowry to the unexpected sexual confession of his best friend—as he struggles with responsibility and flirts with temptation. The first novel to be translated into English from the Lingala, Mr. Fix It introduces major new talent Richard Ali A Mutu, who leads a new generation of writers whose work portrays the everyday realities of Congolese life with the bold, intense style associated with the country’s music and fashion.

Author
Richard Ali A Mutu was born in Mbandaka, Democratic Republic of the Congo, in 1988. He won the Mark Twain Award in 2009, and published his first novel, Tabu’s Nightmares, written in French, in 2011. His novel Mr. Fix It: Troublesome Kinshasa was published in Lingala in 2014, and has since been translated into French as well. Ali was selected as one of the only writers working in indigenous languages for the Africa 39 anthology, which showcased the continent’s most talented writers under forty, including Chimamanda Adichie and Dinaw Mengetsu. He works as a lawyer and writer, and hosts a weekly television program about Congolese literature.

Translators
Bienvenu Sene Mongaba is a Congolese writer, translator, and publisher. He directs Éditions Mabiki, which champions Congolese languages. He has written three books of fiction in Lingala and several in French. He splits his time between Kinshasa and Belgium.

An avid reader and passionate linguist with a keen academic interest in African literature, Sara Sene is a translator working with Italian, English, French, Spanish, and Lingala.