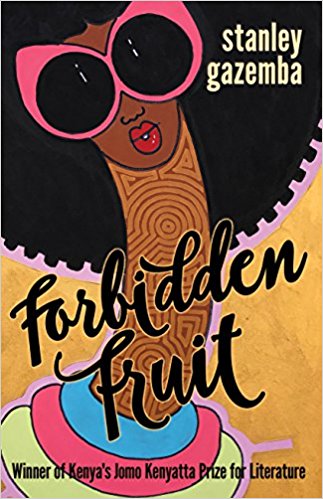 Desperate to make ends meet, Ombima commits a “harmless” crime. When he tries to conceal his misdeed, the simple farm laborer becomes a reluctant participant in a sinister affair. If discovered, the consequences could be disastrous for Ombima’s family, friends, and a spate of unwitting, gossipy villagers.

A delicious tale of greed, lust, and betrayal, Stanley Gazemba’s Forbidden Fruit is more than a dramatic tale of rural life in western Kenya. The moral slips and desperate cover-ups—sometimes sad, sometimes farcical—are the stories of time and place beyond the village of Maragoli. Gazemba’s narrative is one that could just as well unfold in your own neighborhood. Indeed, it probably already has.

First published in Kenya as The Stone Hills of Maragoli (Kwani?, 2010), Gazemba’s novel is storytelling at its best.

“Once in a while I come across a novel that affirms life, without cheapening it, or sensationalizing, a book that presents a human condition with such mastery it makes one proud to be alive. They are, for me, the sort of books that make literature great.”—Binyavanga Wainaina

“What makes [FORBIDDEN FRUIT] so special is that it has no pretensions about attempting to address issues of modernity, of city life, of ‘clash of cultures,’ of the rural-urban divide… the issues it deals with are as immediate, even if they are beyond the gaze, beyond the limits of the urbanity that attracts most writers.”—African Review of Books