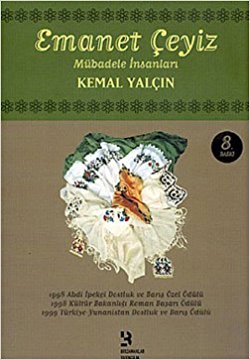 One of the advantages of reading in my adopted language of Turkish is, of course, the range of books available in Turkey by Turkish authors. Books published in Turkey are much cheaper than foreign-language imported books, so this book seemed like a bargain when a bookseller recommended it to me.

It changed the way I looked at the country and people around me and left me stunned. I was surprised to learn that it wasn’t available in English (though it has been published in Greek). I’m reviewing it here as a reminder of the fantastic books that are available in Turkish that have not yet found their way into English.

The title of this non-fiction book (the author himself describes it as a documentary novel) is Emanet Çeyiz – Mübadele İnsanları “The Entrusted Trousseau – Peoples of the Exchange” and it focuses on the stories of people who were forced to move from Turkey or Greece during the Population Exchange in 1923. The Lausanne treaty required that Muslims living in Greece move to Turkey and Orthodox Christians in Turkey move to Greece. Over three hundred and fifty thousand people moved to Turkey and nearly two hundred thousand moved to Greece; though during the turbulent decade around the First World War countless others would also have fled their homes. In the foreword to the 8th reprint of the book the author, describes it as “… one of the greatest sorrows and cultural catastrophes of the 20th century.”

When it was published in Turkish the author described the book as a novel, as “he did not think the Turkish public was “ready” for another genre to introduce this tragedy and that he reached a larger audience through presenting his story as a novel.” This was in spite of the fact that it contains oral accounts of events and it has since been described as one of the first examples of a documentary novel in Turkish.

The book begins with Kemal’s memory of working with his father in the fields of Honaz in Denizli, Turkey as a child. As they rest under the shade of a tree, they talk of place names around them and his father mentions that a Greek, or Rum as they were called in Turkish, used to have a vineyard in a particular area. From there he tells the story of how he and his mother fled from the Greeks pushing into Anatolia from the west while their Greek neighbours also left, but camped in a nearby mountain meadow. During the First World War and the War of Independence that followed, violence increased between the cultural groups, Greeks were viewed with suspicion by Turks and in many areas vigilante groups began to harass minority populations in towns and villages and reactivate fault lines between the cultures that were nearly invisible before. With the defeat of the Greeks, Kemal’s father and grandmother and their neighbours all returned home. Afterwards the young male Greeks living in the town were sent away to Greece, though one knows what really happened to them. The houses owned by the Greeks were ransacked.

Their neighbours were confined in a barn with the other Greek women and children and his grandmother sent his father with bread everyday noting how the two cultures had shared everything in their neighbouring gardens. Then one day the neighbour’s wife and her two daughters came to the door. They were being sent away and could not take everything with them. She entrusted the trousseaux that she had assembled for her daughters to Kemal’s grandparents, saying that if they ever came back, they’d collect it. The trousseaux included a collection of silk towels, bedspreads, sheets, purses, tablecloths and needlework that a bride traditionally brings to her new home after she marries. Most would have been handmade.

As his father told this story he began to cry, a shock to young Kemal.

The story picks up many years later when Kemal, now living in Germany having been exiled after the 1980 coup, asks his father about these neighbours. This sends him on a journey through Greece and Turkey and back to Greece again in pursuit of the neighbours to return their trousseaux. Along the way he talks to anyone who remembers the Exchange and includes the stories of 15 Greeks and 15 Turks who were forced to migrate. Each of the stories is heartbreaking; some include horrific instances of violence and despair. There are years of adjustment to their new homes. For 50 years after the Exchange no one was allowed to revisit their old countries. The uprooted were housed in the abandoned homes left behind by others and found themselves in unfamiliar land, possibly living through a language they barely knew. Learning how to farm, what would grow, finding a trade; everything was a struggle.

The reactions of the migrants vary; some never mention the exchange, some talk of how much better it was in the old country, some are bitter, some resigned. All are scarred. Some refuse to share any information in case the younger generations would begin to hate those involved, people that they still have affection for in spite of all they have experienced. The amount of pain that this Exchange caused, the wounds that are really just lying under the surface; all are laid bare in simple devastating language.

It made me more aware of the old Greek houses about to collapse in downtown Çanakkale, Turkey and of the name changes of local villages as the population changed. It opened my eyes to the dark side of the War of Independence and how the line between vigilante and war hero is non-existent. It also made me aware of other population exchanges; of Greeks forced out of Istanbul in the 1960s, of Bulgarian Turks who only arrived in Turkey in the 1980s following in the footsteps of others who arrived over a century earlier.

It’s a warning that unfortunately has become timelier since I read the book first: It is surprisingly easy to destroy the neighbourliness and affection that exists between two groups with suspicion, fear and mistrust. It’s a reminder that civilization is a very thin veneer.

Kemal Yalçin was born in Honaz, Denizli in 1952. He worked as a high school philosophy teacher before becoming a journalist. Forced to leave Turkey after the 1980 coup, he settled in Germany and has been teaching in Bochum, Germany since 1989. Beginning his literary journey with poetry, he continues to write novels, stories, poems and children’s stories. He has published 20 books to date; some of which have been translated into English, German, Italian, Spanish, Greek and French among other languages.

‘Emanet Çeyiz – Mübadele İnsanları’ was awarded the 1998 Abdi İpekçi Friendship and Peace Special Award, 1999 Turkish-Greek Friendship and Peace Prize and the 1998 Turkish Ministry of Culture Novel Success Award. His book called “Seninle Güler Yüreğim” (2006) about Armenians living in Turkey after 1915 has been published in English as “You Rejoice my Heart” (Tekeyan Cultural Association, 2007).

Catherine Yiğit is a translator and writer living in northwest Turkey. Originally from Ireland, she is inspired by local history, which in her corner of Turkey includes Troy and the Gallipoli battlefields. She blogs at www.skaiangates.com.

2 thoughts on “A Documentary Novel: “The Entrusted Trousseau – Peoples of the Exchange” by Kemal Yalçin”