Historically, Francophone graphic novels (GNs) have been translated into English in the U.S. more often than other types of books, on average. Famous twentieth-century examples that most English-speaking readers will be familiar with are Asterix and Tintin, as well as the turn-of-the-twenty-first-century breakaway hit, Persepolis. As those three titles hint, GNs can cover a wide range of territory, from satire to memoirs, and from silly fun fiction and edutainment to historical fiction and nonfiction. Which I should know, as GNs are a genre I love to read and translate: all but four of my published translations (roughly forty to date from French and Italian into English) are of graphic novels for children and adults.

In this two-part blog post, I’m going to take a look at several translations from French into English from two excellent graphic novel publishers that I am honored to have worked with. Both are a little over a decade old, and both publish what I would consider European-style, art-driven GNs, by which I mean that the graphics are always well-done and an equal partner to the story—which is itself also well-written—so that the books are a true marriage of both aspects and a delight to read.

Starting with an impressive initial list in 2006, First Second has been an imprint of beautiful graphic novels for all ages, featuring numerous award-winning books, such as Kirkus Review’s Best Book of the Year, Sardine from Outer Space* (by Emmanuel Gilbert and Johann Sfar, translated by Sasha Watson, 2006). In the first of six volumes of this absolutely zany series, we meet the young swashbuckling Sardine, her cousin Little Louie and her pirate uncle, Captain Yellow Shoulder. Flying the spaceship Huckleberry, they’re always on the run from the child-hating Supermuscleman and his evil henchman, Doc Krok—except when Yellow’s mom crash-visits into them with her ship, the Blue Java, hoping to hitch Yellow up with the unavailable Vinaigrette.  A chapter book for middle grade readers that’s filled with pure punny fun fortified with a huge dose of silly wordplay, Sardine… cracks me up every time I read it. 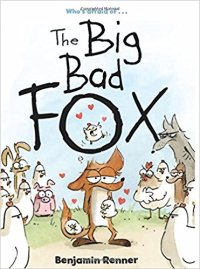 the past to the future, we find The Big Bad Fox* (by Benjamin Renner, translated by Joe Johnson) which is scheduled for release on June 20, 2017.  A sweet anthropomorphic tale with adorable watercolor illustrations, The Big Bad Fox is about a fox who is, well, truly bad at being a fox.  But he makes a wonderful mother—despite himself—when the eggs that he steals (and then broods on at the forceful behest of the Big Bad Wolf) hatch and the chicks imprint on him.  With well-differentiated, giggle-worthy characters and laugh-out-loud narrative twists and running gags, The Big Bad Fox is a children’s story that works well on multiple levels; adults, too, will find the situations hilarious.
As in all the best children’s books, whether graphic or not, The Big Bad Fox explores major, universal themes, in this case about identity vs. appearance, self-acceptance and love.

Turning next to a GN for adults—one sprinkled with sex, drugs, and music (if not always strictly rock’n’ roll)—there is First Second’s California Dreamin’: Cass Elliot Before the Mamas & the Papas* (by Penelope Bagieu, my translation), released March 7, 2017.  An engaging story illustrated with great black-and-white drawings, the book covers the life of Cass Elliot (née, Ellen Cohen, aka Mama Cass) from her birth as a child into a musical Jewish family to a singing teen with an eating disorder, through her start as a singer trying to catch her break to stardom, and ending with the formation and then dissolution of the Mamas & the Papas.  As a musician, I found it intriguing to read about how the song “California Dreamin’” was created—especially because it is an eternal challenge (one that Bagieu meets admirably) to depict music-making accurately via words or art. As the translator of Bagieu’s well-wrought bio, I found the story of this talented, unique artist both fascinating and yet very sad, much as Elliot’s life inevitably was. As is the case with all the books I’m mentioning from First Second, the unifying themes here are identity and the struggle to find self-acceptance, which are presented via the hallmarks of this imprint: good storytelling, excellent writing, and stellar art.

Finally, moving to the very serious, we now turn to another award-winning GN for children, Hidden: a Child’s Story of the Holocaust* by Loïc Dauvillier (translated by Alexis Siegel, 2014). Hidden is a great example of something that, at their finest, GNs can do with almost unparalleled success: address a most difficult topic in a way that is palatable and understandable for young readers—it’s told from a child’s viewpoint—and that still speaks just as well to adults. Written in simple, direct language, Hidden is the award-winning story of a French Jewish grandmother telling her granddaughter about her own experiences as a child during the Holocaust—encountering discrimination and prejudice at school in Paris, hiding from the Nazis, being forced to flee to the countryside without her parents, losing her father, eventually being reunited with her post-concentration camp mother who is literally skin and bones—set into an intergenerational frame that is heartwarming despite the awfulness of the intervening story.  While it’s not a light read, it’s a beautiful story that brought me to tears more than a few times—and no matter how many times I return to the last page, I still cannot read it and remain dry-eyed.

Award-winning opera singer Nanette McGuinness is the translator of over 40 books and graphic novels for children and adults, including the well-known Geronimo Stilton Graphic Novels. Her latest translations, California Dreamin’: Cass Elliot Before the Mamas & the Papas (First Second Books, from French into English) and Thea Sisters #7: A Song for the Thea Sisters (Papercutz, from Italian into English), will be released in March 2017.