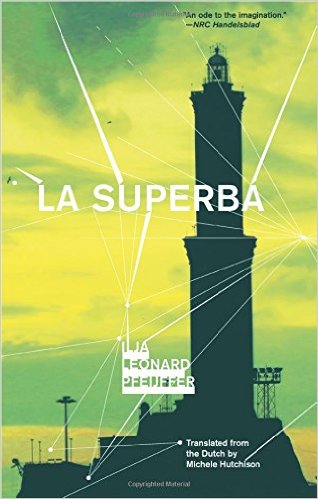 Everyone is the embodiment of their own fantasy. Everyone looks the way they imagine and lives the life that goes with that. The butcher on Via Canetto Il Lungo looks like a butcher—a colossal hunk of meat with a bloody apron and magisterial claws made to plow through carcasses. He looks like that because he immerses himself so well in his fantasy of being a butcher. And the elderly Italian gentleman sits on a bench on Piazza Caricamento near Porto Antico, looks at the ships and fantasizes about far-off destinations: Barcelona, Tunis, Panama, La Merica. And when he returns home obediently in time for dinner, he feels satisfied, enriched, and somewhat tired, like a man returning home after a long, adventurous sea voyage. His grandchildren wanted to offer him a cruise to Barcelona but he refused the gift because he’d been going there every afternoon all those years and every afternoon it was beautiful weather and the most beautiful people strolled along the unnaturally beautiful boulevards toward the seafront to sit on a bench every afternoon and fantasize about Genoa, La Superba, that robbers’ den on the Mediterranean, where the whores are as black as the endless night in the alleys, where the only light flashed off flicked-open knives, and where you might be kidnapped on every street corner and sold as a white slave in the slums of Tangier or Casablanca. Every afternoon, the elderly gentleman had to smile about their fantasies of his city. But he’s grateful for them because the myth they invent makes Genoa deeper, richer, and more beautiful. And there are days

when he’s in the mood to believe their myth. Those are the days he returns home a little later than usual, almost too late for dinner. And like every evening, he says nothing about his adventures.

Everyone’s had the nightmare that the world around him has been created by an invisible director—that he’s living in a stage set populated by extras and that everyone knows about it apart from him. Like in that film. What’s it called again? I’ve written about it before, in another book. Look that up for me, my friend, would you? Entire religions have been built on that nightmare. Almost every religion. At least, every monotheistic denomination. The world we think we see is in fact the perverse fantasy of an omnipotent director who wants to test us in a complicated game. It’s up to us to guess the rules of the game. A fantastic game show of life and death. If you guess right, you get seventy times seven vestal virgins under streams of ambrosia and harp music in the blinding artificial light of the Almighty One. If you guess wrong, you burn in Hell for all eternity. A golden formula that scores high viewer ratings among the ever-critical, ever-bored audience of immortals.

Everyone is familiar with the opposite fantasy too. Everyone has played God at some point in their thoughts. The world around us exists only because we observe it, give it meaning, and invent it. Without our eyes and thoughts, the world wouldn’t exist or would just hang around pointlessly on its own somewhere like a far-off galaxy still waiting for us to discover it, see it, and give it a name. Everything that exists exists only in our minds, otherwise it doesn’t exist. And who says that there are many of us? Who says I’m not the only one? Who says that you exist, my friend? It’s much more likely that I’ve made you up. In the same way, I’ve made up the street names, the pavement, and the people strolling by. And not just because I’m a writer. I only see what I want to see, as all people only see what they think they know or expect. If I invented a butcher, I would invent him exactly like that: a colossal man with a bloody

apron. Maybe he’s a banker and the redheaded girl on a scooter is the butcher. But it isn’t like that because it’s not like that in my mind. And as soon as I see an elderly Italian gentleman sitting on a bench watching ships, I’ll imagine what he’s thinking. It’s my job. But that’s not the point. We’re all like that. You too, my friend. We all live in each other’s invented worlds without any real contact. We are extras in each other’s fictional autobiographies. We are the decor of each other’s illusions.

Of course I invented Genoa. In some ways, the city also exists without me, at least I’d be happy to assume that. You can go there yourself. It has an airport named after Columbus, who supposedly came from Genoa. He’s the man who invented America. His dream was to reach India by going west and get rich. He reached Haiti and saw people in funny clothes. “Oh, you must be Columbus,” they cried elatedly. “Hooray! We’ve been discovered!” His fantasy was that he’d reached India and that’s why he called them Indians. And that’s where the fairy tale that cowboys have to shoot Indians comes from. In the meantime, Genoa had become rich off the silver from the wilderness now called Argentina. But when the cowboys had well and truly won and built skyscrapers, tens of thousands of destitute Italians left from the Port of Genoa, following in Columbus’s footsteps, chasing the dreams of wealth and a new life. But flights to Christopher Columbus Genoa International Airport are rather expensive at the moment. I’d advise you to fly to Pisa or to Milan–Malpensa. Then you’d arrive late at night to Brignole station or Palazzo Principe. From that second station, you can easily walk along Via Balbi past the budget hotels to Largo di Zecca, Via Garibaldi, and Piazza de Ferrari. But you can also go straight from the station to Africa, to sailors, whores, and danger. The best way to arrive is by boat from the south. Then the city looms up like an impenetrable wall of overconfidence. Genoa, La Superba. Of course you can come here. But of course I invented it. You’ll never see it the way I see it, until I tell you how to.

I’ve also made up the fact that this is my city, the natural home of my true soul, where I will be truly happy for the first time, as I’d previously made it up that Leiden was that place and, before that, Rijswijk in Zuid Holland, and as Casablanca, Tunis, Zanzibar, or Gotham City could very well be in the future. Not that I’ll ever leave this place, but it’s about the principle. I watch the ships every day. And if, on a windy morning, a large ferry from foreign climes docks in the distance behind Darsena, and the labyrinth fills with fresh strays, then, on a morning like that, in my city, at walking distance from Capitan Baliano, Piazza delle Erbe, and the Bar of Mirrors, as the fishermen curse and the whores want to love me, as dark clouds gather about the fortresses on the hills, then I feel…strange to say it…then I feel…strange to believe in your own fantasies…but then I feel truly happy at the same time.

As I write this, a tramp who looks like a tramp shuffles by. He is wearing a kind of alien costume made of objets trouvés and junk. Bedraggled teddy bears dangle from his suit of armor. He has a magic mask made of compact discs. He uses a found stick to rhythmically beat an empty Coca-Cola can as he walks by. He is a shaman. He is God in the depths of thoughts. He sees nothing and nobody. He makes us up when he needs us. He lives entirely in his own fantasy. He looks completely happy. I feel very much akin to him.

Author
Ilja Leonard Pfeijffer (b. 1968), a classicist by training, made his debut with the poetry collection van de vierkante man (of the square man, 1999), an homage to the experimental poetry of his great models, Pindar and Lucebert. In the years that followed, in addition to poetry, he has written stage plays, essays, columns, travel accounts, stories, political satires and four novels written in the spirit of Rabelais. In his other novels, he has played a game with world literature and divided the critics between those proclaiming him a genius and those who thought him an antiquated stylist. He’s a bit of both. La Superba is Pfeijffer’s masterpiece, and was greeted with unanimous praise, including the most prominent recognition with the awarding of Libris Literatuurprijs, the Netherlands’ most prestigious literary award, and the Tzum Prize, awarded for “the most beautiful sentence of the year,” which he has won twice.

Translator
Michele Hutchison was born in the UK in 1972 and has lived in Amsterdam since 2004 with her Dutch husband and two children. She was educated at UEA, Cambridge, and Lyon universities. She translates literary fiction and nonfiction, poetry, graphic novels, and children’s books. Recent translations include La Superba by Ilja Leonard Pfeijffer, Roxy by Esther Gerritsen, and Fortunate Slaves by Tom Lanoye.