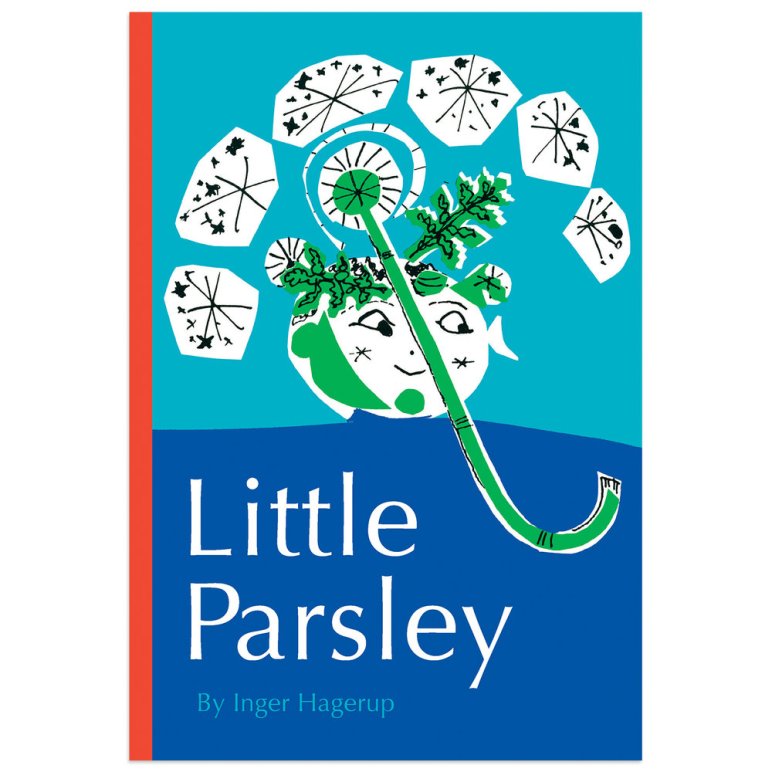 Inger Hagerup is recognized as one of Norway’s greatest 20th century poets. Originally published in 1961 with illustrations by Paul René Gaughin, Little Parsley is a classic collection of 17 of her poems for children, freshly translated from the Norwegian by Becky Lynn Crook.

Ideally suited to children in lower primary, Little Parsley is an attractively produced volume with a cheery, bright cover that encourages readers to go in for a closer look. And look they should because there is plenty more to enjoy inside! Hagerup approaches life, especially the natural world, through a refreshingly different lens. A sweet pea considers itself to be both a flower and a bird; a spear-bearing wasp zooms through the air in a striped bathing-suit; a pig ponders on important market prices. And what’s not to love in an ode to a gooseberry?

Gumptious, scrumptious gooseberry/you who are so plump and dear

Each double spread features one short poem accompanied by a colorful, and often humorous, pen and ink drawing. The language and rhyme flow beautifully although younger (and some older) readers may stumble on some of the more complex words, such as ‘curlicues’, ‘burlapy thistles’ and ‘bedlam’. These are sprinkled throughout the work, however, and can often be understood in context.

There is a glorious old-fashioned look and feel to some of the poems. Shoemaker Madsen, for example, would rather make lace at a slow pace than mend people’s shoes, while in ‘Pennalink, Pennalink’, some readers may have their first glimpse of a fountain pen and ink bottle. (Along with a few curlicues!) Overall, however, this is a timeless and fun collection of poetry that will appeal to readers of all ages.

Note: That Summer, a second book of poems by Inger Hagerup, illustrated by Paul René Gaughin and translated from the Norwegian by Becky Lynn Crook was published by Enchanted Lion in December 2019.

Laura Taylor is the founder of world children’s literature blog Planet Picture Book. She is a small business copywriter, NAATI-certified translator of French into English and member of AUSIT and IBBY Australia. When she is not writing, she is reading, and chasing after her two young children.  She tweets regularly @plapibo and posts at www.planetpicturebook.com