Across the first month of 2020, Sophie Baggott is sharing her thirty favourite books by women from across the world. Find out more about her project to read women writers from every country worldwide here.

From Armenia, My Grandmother: A Memoir by Fethiye Çetin (tr. Maureen Freely) is a beautiful testament to the author’s grandma – a short but powerful book of remembrance. 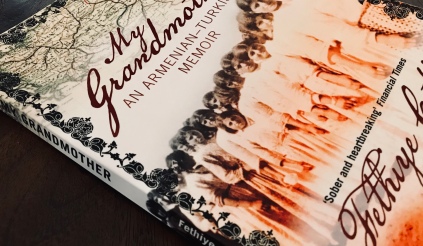 a nutshell: this intimate memoir shares how Çetin learned of her grandmother’s hidden history – that she was born a Christian Armenian and was abducted from the ‘death march’ to be raised in a Muslim Turkish household

a line: “suddenly her eyes brightened, and a smile spread across her face. ‘So they didn’t forget us, she said”

an image: in conversation with a bookseller, Çetin learns that several women in her hometown used to make çöreks (sweet braided bread), just like her grandmother, to share with visitors – while hiding their truths from children & grandchildren, this was a beautiful way of continuing their Armenian traditions in secret, and it was only years later that the significance became known

a thought: Çetin writes movingly about how her grandmother’s story was barely believable for her at first since it was so at odds with the heroic poems she had to recite at school on national holidays – it felt reminiscent of my own feelings about British  history lessons which focused on heroic efforts in the World Wars and never once touched on the British Empire & its atrocities

a fact: as many as 1.5 million Armenians were killed in the genocide that took place between 1914–22 and there are, by some estimates, two million Turks who have at least one grandparent of Armenian origin – Çetin’s aim for this book, first published in 2004, was to “reconcile us with our history; but also to reconcile us with ourselves”