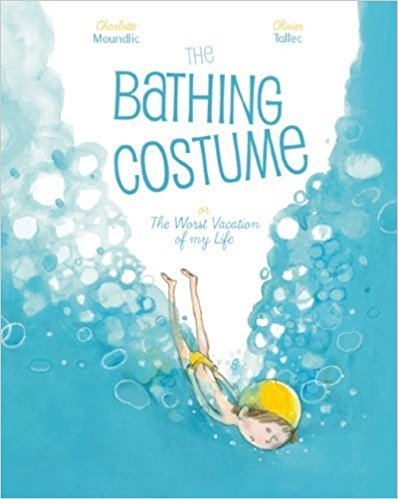 The book‘s protagonist is Michel, an eight-year-old Parisian boy. His brother Martin, who’s twelve, detests him, and he detests Martin right back. This summer, Michel will go away alone, which really means without his mom, to stay with his grandparents while his parents move apartments. To add to the horror, Michel’s older boy cousins will be going, too. As Michel says, “To put it simply, they are big, strong, and pals with Martin. I am their scapegoat.” Recounted by Michel himself, his vacation doesn’t turn out to be such a complete zero after all. Between a competition to see who can shower the least, wild bike rides without gear, and a tooth that finally falls out, Michel discovers both independence and real moments of happiness.

The text is both very funny and moving, with good reason, for we see an eight-year-old’s vacation with his grandparents and older cousins through his own eyes, with all of the little things that are important to a boy of eight: the dumb things that he’ll never tell his mom; the small triumphs; the disregard and mocking of the older cousins; the shame of having a bathing suit that slips off in the pool; the freedom of being away from home; and the satisfaction of overcoming fears. As always, Olivier Tallec’s illustrations render all the emotions of our little hero with an enormous amount of expressiveness, talent, and sheer gorgeousness.

The Bathing Costume, or The Worst Vacation of My Life
Charlotte Moundlic, Olivier Tallec (Ill.)
Translated from the French by Claudia Zoe Bedrick
2013, Enchanted Lion
ISBN: 978-1592701414