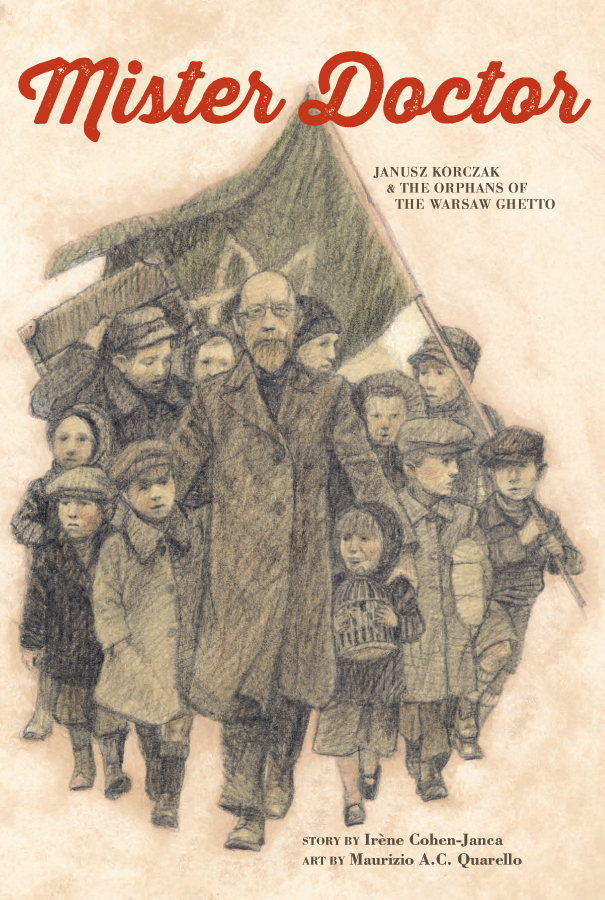 Nothing—not even the chance to live—makes Dr. Korczak abandon the children of the Warsaw Ghetto.

November 1940. A circus parade walks through the streets of Warsaw, waving a flag and singing. They are 160 Jewish children, forced by the Nazis to leave their beloved orphanage. It’s a sad occasion, but led by Doctor Korczak, their inspirational director, the children are defiantly joyful.

Their new home is in the ghetto, a prison for Jews. Day by day, more people arrive. Some are forced to live on the street and freeze to death. Others die of disease and starvation, Though they lack food, warmth, and freedom, the children’s spirits are sustained by the steadfast respect and kindness of “Mister” Doctor.

But the Jewish children will never grow up: in August 1942, they board the train that will carry them away to the death camps. Offered his freedom, Doctor Korczak refuses to abandon the children and proudly joins them on their last journey.

This profoundly moving illustrated book is based on the true story of the celebrated Polish educator, writer, and doctor Janusz Korczak. His works inspired the Universal Declaration of the Rights of the Child, which was adopted by the UN in 1959.

With mood-setting artwork and lyrical text, Mister Doctor allows young readers to meet the remarkable man whose humanity and bravery still stand as a glimmer of light in one of history’s darkest periods.